April is a month where most of the world waits with anticipation as flowers spring and the trees bud. These little wonders show us how incredible our planet is. It’s no wonder that Earth Day officially lands in Spring. The fresh life reminds us all how important it is to give back to the planet more than we take. United, we still have time to make a change and fight to save the earth. Yet, we’re running out of time to band together: to decide, once and for all, that we’re going to take a stand.

The official goal of Earth Day is to “invest in our planet.” This plea for help doesn’t just relate to individuals and doesn’t just appeal to businesses, but entreats society as a whole. At Joan, we take our environmental impact seriously. We strive to provide top-of-the-line solutions while giving just as much back to the planet. Our commitment doesn’t just stretch to Earth Day — we aim to minimize our footprint year-round. This year, we’ve decided to do something a little fun and special for Earth Day. Read on to find out what.

There are countless ways we humans exploit the planet and just as many ways for us to improve how we use it. Still, there are three key areas that need to be addressed sooner than later.

Most of society thinks we’re doing pretty well on this front, right? We’re recycling more, relying on digital documents instead of printouts… While these actions help to a point, forests are still disappearing at unsustainable rates. In fact, deforestation increased by 12 percent in 2020, as if society is moving backward in the fight against deforestation instead of forward.

2,400 trees are cut down each minute around the world. By the year 2030, Earth may only have 10% of its rainforests left. In 77 years, there may be no forests left at all, aside from the insufficient number of saplings we’re planting today.

Planting trees is a start — an opportunity to heal what we’ve broken — but it’s not enough to change our carbon footprint. We need to lessen our pollution worldwide to make a difference.

Water covers 71 percent of the earth’s surface. It’s mindboggling to think that we can ruin areas as vast as our oceans, yet we are ruining them.

The first and most prominent issue is plastic. 8 million tons of plastic enter our oceans every year — that’s over 2 percent of all plastic made. For decades, plastics have been killing ocean life from turtles to whales and the problem is getting worse. Other ocean-based pollution comes from untreated industrial waste, leaked chemicals, oil spills, greenhouse gasses, and more.

As for greenhouse gasses, 20 percent of the world’s coral reefs were lost between 2009 and 2018 due to changes in ocean temperatures and water pollution. By 2050, specialists expect that number to jump to over 70 percent. Without drastic measures, coral reefs are expected to all but disappear around the year 2050.

Humans are having an impact… and it’s not a good one.

With 2 percent of all plastic made ending up in the ocean, where does the rest of it go? Landfills. Plastic doesn’t decompose. Instead, it simply breaks down into smaller particles that never truly nurture or help heal our planet.

Styrofoam is another landfill item that causes long-term damage to the environment. The material is full of chemicals that can be harmful to living creatures, including humans. It’s important to learn about how your waste impacts the environment — which materials will decompose, which are biodegradable, and which can be reused.

Another problem with landfills is the sheer magnitude of products people throw away. For example, every year, Americans throw away 14 million tons of clothing. This number is up from the 7 million tons recorded 20 years ago.

Humans are causing even more problems in Earth’s atmosphere. With the amount of smog seen in large cities, most people believe that harmful pollutions are visible. According to National Geographic, this simply isn’t true. More often than not, “air pollution is invisible.”

Not only can air quality cause shortness of breath, but is also known to increase the risk of lung cancer. Manmade contributors to air pollution include city traffic, manufacturing factories, office structures, power plants, pesticides, and more.

After all this talk of gloom and doom, there’s hope. Companies around the world have committed to becoming carbon neutral, or have a carbon footprint of zero, within the next couple of decades and Joan is on board.

The best way to keep products out of landfills is to make them with reusable and recyclable materials. At Joan, we strive to make our displays and hardware out of sustainable resources, like aluminum and glass. Our top-of-the-line materials are both long-lived and will be reused in the future.

Still, we can do better. In 2021, Joan began a new initiative: for every Joan device sold, we plant one tree.

Our ePaper displays use such little power that it’s relatively easy to make up for our carbon footprint. For example, our Joan 6 Pro can last six months on the electrical power it takes to make a single cup of coffee. Even so, our team wants to go the extra mile. When it comes to the environment, we want to spark conversations and raise engagement.

These reasons, and more, are why we’re trying something new for Earth Day. In the week leading up to April 22, 2022, you will have the opportunity to effortlessly plant 2 trees:

Click here to fill out the form and take the quiz!

That’s it: it’s that easy to plant a tree on Earth Day.

This isn’t our first tree-planting splurge and it won’t be the last. Follow us on social media for the next time we make giving back to the planet this easy. 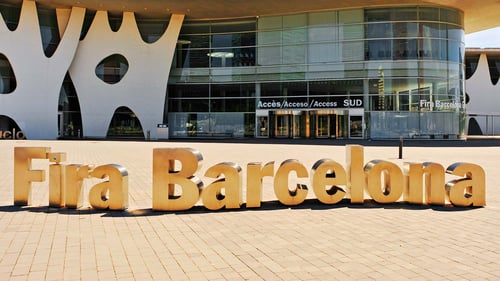 Meet us at ISE 2022: Improve your workplace management with Joan

Joan lives and breaths sustainability, so in the week leading up to Earth Day we decided to launch a campaign to promote environmental literacy.