When we think of e-ink, our minds usually turn to e-readers. When Amazon released its first Kindle in 2007, many other companies jumped aboard, creating their own e-readers and e-ink displays.

E-ink was designed as an electronic screen that acts like paper, which is why e-ink technology is also referred to as e-paper: electronic paper.  In the age of vibrant LED, LCD, plasma, or other modern displays, do we really need another type of display?

E-ink fills a hole that today’s typical displays are passing over. Read on to find out how.

Where e-ink technology really stands out is its low use of power. Simple e-ink displays can last years on one charge. The more complex ones that use Wi-Fi or Bluetooth still last months.

Secondly, e-ink users prefer a display that isn’t backlit. We stare at backlit screens all day; they’ve lost their novelty. People want something different to look at instead of the computers we’ve been stuck in front of since the 1990s. Plus, e-ink offers non-glare displays, which are easier on the eyes than other displays on the market.

Next, some people still prefer that classic look of pen and paper or chalk and a chalkboard. Today, most companies and businesses want a touch of class with their modern style. Rather than making your office resemble a walk down the Star Trek Enterprise, add some class with paperlike displays instead of blazing LCD screens.

“People don’t want to walk up to another LCD screen.” – Russ Wilcox, founder and former CEO of E Ink

Whatever you can do with paper, imagine doing it with an e-ink display. Most of the uses for e-ink today originate from someone dreaming how to make a paper experience better. Here are some examples.

At the end of 2020, Visionect announced Joan 32, a 32-inch e-ink display. It can be placed wherever it’s needed the most, whether that be an office building, an airport in a shopping mall, or anywhere else where information needs to be displayed. It’s most often used for corporate communication, digital menus, airport signage or to provide wayfinding information.

Joan’s battery lasts for weeks and can be recharged overnight. There’s no need for a constant power source, drilling, or wiring, which is a huge advantage over LCD screens. 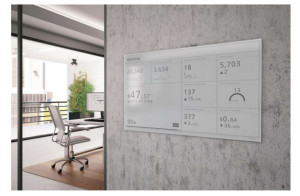 Sign up to learn more about Joan 32 and receive additional discount.

Launched in 2017, reMarkable recreates the pen and paper look and feel that a backlit screen simply can’t. The device is listed as a “tablet” with one very notable difference to the popular tablets on the market: it uses e-ink.

“Despite the leaps and bounds of technology, with tablet styluses and Wacom digitizers, ordinary pen and paper has survived to this day”

reMarkable has a 10.3 inch e-ink display, which is decently larger than the Kindle and more practical for drawing. 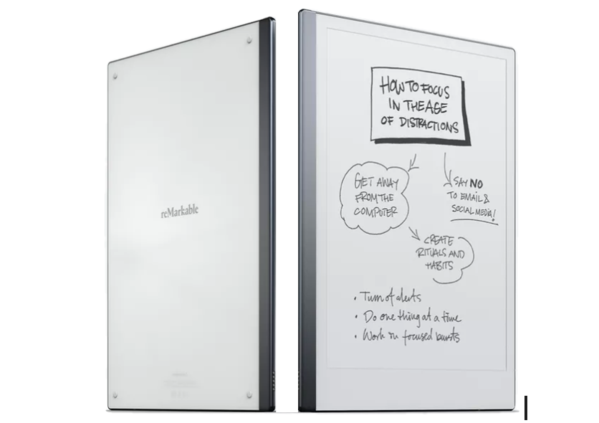 In 2020, IONNYK came up with the idea to use e-ink in place of black and white photos. IONNYK’s 31-inch display is encased in a frame, which cycles through a galley of images. The result is lifelike photography that convinces viewers they’re looking at real photo prints. IONNYK’s frames are based on Visionect’s 32-inch screens. 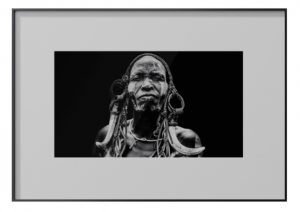 Although it’s come a long way, e-ink technology is not as responsive as LCD, LED, and other mainstream displays. Users report e-ink displays taking “15 to 20 seconds to power on completely,” not to mention seconds to simply wake them from sleep mode.

However, most e-ink displays, particularly the larger ones, don’t have front lighting and are not visible in dark environments.

Because e-ink uses capsules with different colored particles that rise and sink to change the screen’s color, the devices are limited to greyscale displays. While some e-ink displays are breaching this barrier, it’ll take a while for others to add more colors to their e-ink technology.

Considering e-ink displays are composed of millions of minuscule capsules in a thin film, it will take a lot of investment for the displays to get much larger than 42 inches. Although progress is coming, it won’t be as rapid as Samsung’s Wall and its 292-inch screen.

As mentioned, it takes a lot of investment to get e-ink displays to be larger and colorful. Therefore, the displays aren’t cheap. With only a few e-ink manufacturers releasing e-ink displays, there aren’t really less-pricey alternatives.

Are they worth it? If you’re a classicist, pragmatist, or innovator, e-ink displays are for you. The devices are classy and low-maintenance with endless uses. If your room isn’t too dark to read a piece of paper, you’ll love integrating e-ink displays in your space. 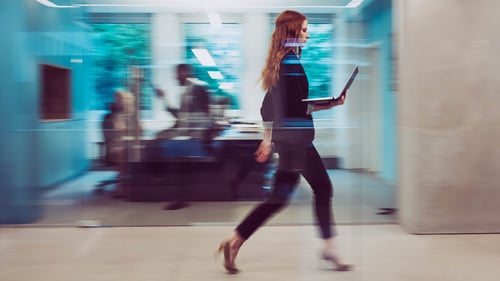 6 most common corporate meeting problems and how to solve them

E-ink was created as an electronic screen that functions similarly to paper, which is why it's also known as e-paper. E-ink fills a need caused by today's conventional displays. Keep reading to learn E-ink benefits.