What happened to Geoffrey?

Geoffrey was a multi-award-winning electronic ordering system, price list and newspaper all in one device that had been used in numerous restaurants in Slovenia and the UK. Geoffrey let customers order food and drinks in the language of their choice, browse daily news by global media, check the weather report, read up on events nearby, and much more. Which was pretty cool.

Such a thing as too cutting-edge?

Whilst digital menu boards are all the rage now (case in point) – this was not the case when Geoffrey was launched (points to us for being ahead of the times though). The vision behind Geoffrey was to create the world’s first interactive waiter, always at the convenience of the customer in the language of their choice.

It was designed to meet the needs of the hospitality industry and it did just that. Initial tests showed that the Geoffrey dedicated system will get 93% of guests to order with the devices, which based on our statistics nets 10%-20% higher revenues. This is huge in an industry that works with typical profit margin of ~3%.

Is there a Geoffrey in my favourite restaurant?

Not for now, no. The bright minds behind Geoffrey were revolutionary with their concept but the market was not quite ready yet. As, with some of the best inventions, it was a little bit too advanced for the times. So they got back to the drawing board and, voila, Joan followed Geoffrey. Whilst both products have guy/girl names, they are pretty much gender neutral, cool names we liked for these smart, techy, innovative devices.

With Joan, we got the product market fit just right – the meeting room digital signage industry was on the verge of taking off and take off it did. Back in 2016, there were already 52 different options out there for digital meeting room signs – and those were just the software or software/hardware solutions. Joan was leading the pack, of course. Fast forward to 2018, and not only have we signed on clients such as Hyperloop, Dell, Microsoft (to name drop a few), and have had over a billion meetings booked on Joan but we have also managed to nab two Red Dot design awards for Joan. Not too shabby. 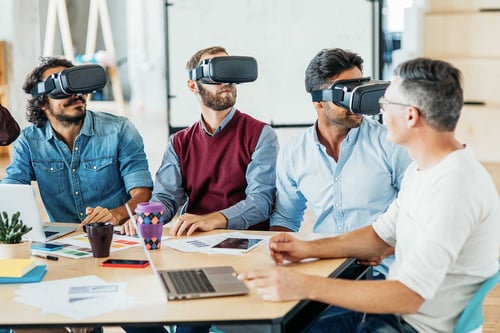 Before there was Joan, there was Geoffrey. A multi-award-winning electronic ordering system, price list and newspaper all in one device.