How Kalera saw a “phenomenal” ROI with Joan 6

So then, why did he contact Joan? Because he wanted to share how much he loves the Joan 6 devices he installed in the Kalera office space.

With over 33 years of experience in the IT realm, Mr. Danzig knows what he’s talking about. Head of Kalera’s IT team, he knows the company’s meeting room struggles inside and out. Luckily, he was able to solve them, witness an incredible ROI, and achieve a steadfast peace of mind. Read on to find out how.

Meet Kalera and the team

Kalera is a hydroponics company that grows plants in nutrient-rich water to supply supermarkets and other companies with quality produce at affordable prices. Indirectly, Kalera supplies food to restaurants, schools, and other venues.

They grow their produce without soil or chemicals and use significantly less water than traditional hydroponics. Vegetables are grown efficiently, with lettuce coming to fruition in only four to six weeks. With a strong focus on the well-being of people and the environment, it’s no wonder Joan 6 caught Mr. Danzig’s eye. Both companies have a passion for supporting others and caring for the environment.

As for the Kalera team, Mr. Danzig has nothing but great things to say. According to him, the majority of employees at Kalera have “letters after their names,” such as “MBA,” “Ph.D.,” and other honorifics. Mr. Danzig describes the Kalera team as a highly-intelligent team, paving the way for people to receive high-end, affordable produce. The entire team is dedicated to making affordable, healthy food accessible to everyone.

The Kalera office is a great place to work, full of laughter and genuine, jovial smiles. Despite the prestigious degrees linked to everyone’s titles, there’s little to no hierarchy on site. Mr. Danzig describes his experience as, “I may have a collared shirt, but you’ll see no tie” in the office. Overall, the team is made up of a wonderfully eclectic collection of people from around the world.

“The camaraderie is above and beyond anything I’ve ever experienced.”

With teams stretched around the world from Bangladesh and Singapore to the United States, there’s a lot of communication within the company. Kalera relies highly on digital communication from phone connections to room booking tools. The company uses technology to show its internal family and external parties what Kalera does and what goes on within the company. Therefore, meeting sizes range anywhere from a couple of employees to 1,100 participants.

Still, despite the company’s focus on digital tools, Kalera is an office-based company. Due to the nature of their work, the majority of their staff work on-site during the week. With such a busy workspace, paths got crossed, meetings overran and employees had trouble identifying whether a room was available or not. With so many meetings, of any scale, plus most employees working on-site, Mr. Danzig saw room for improvement.

With 33 years of experience, Mr. Danzig has been everywhere and worked in many industries including forensics, private detective, banks, large contractors, and many, many, many different offices, big and small. It’s not every day he comes across a beat-all solution that makes his job enormously easier. Yet, Joan did just that.

When looking for a solution, his criteria were simple but unique: he wanted a reliable wireless solution that didn’t require a steady power source. Luckily, “unique and simple” are Joan’s middle names.

However, when Mr. Danzig came across Joan, he thought the Joan 6 was too good to be true. Prepared for disappointment, he did some digging. After some time researching, Mr. Danzig was amazed that he couldn’t find a single negative review of Joan and Joan products.

With the lowest failure rate in the industry, simple user interface, wireless design, and affordable price tag, it wasn’t long before Kalera was equipped with its own Joan 6 displays. 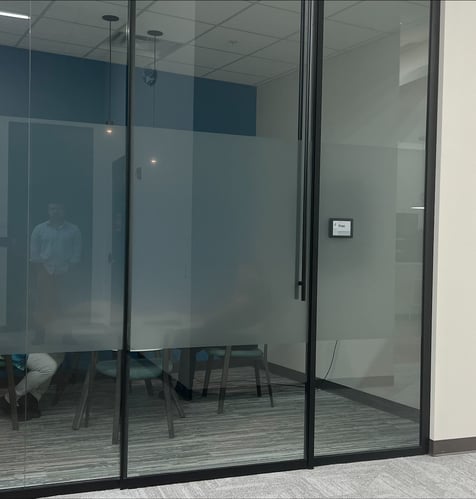 At Kalera, the Joan 6 ePaper touch screens have been a huge hit, enabling users to walk up and book a room with the tap of a button. The Joan room booking solution has fit right in, allowing employees to conveniently book rooms from their in-house calendar system or even their mobile devices.

It takes one glance at the Joan display to find out if a room is occupied or not. What’s more, Kalera has seen an incredible ROI, soaring above and beyond anything they expected. Also, when it came to Joan support, Mr. Danzig was blown away, raving:

Over the months, Joan has built a steadfast relationship with Mr. Danzig: “I think they know my middle name now,” he joked. From Mr. Danzig to Kalera executives, their Joan experience has met and exceeded the Joan reputation.

Naturally, the Joan 6 design fit right in. The device is compact and was easily mounted on the of Kalera’s meeting rooms’ glass walls. Again, the display exceeded expectations and was “nowhere near like any tablet [Mr. Danzig] ever experienced.”

As for the setup? Mr. Danzig describes the process in three easy steps: “open it up, plug it in, let it sit.” In truth, he joked that the mounting process took less time than writing the email introducing the new displays. After the device booted up, Mr. Danzig found the application easy to use and straightforward, with one hiccup that started his great Joan Support experience.

After turning the Joan 6 devices on, Mr. Danzig found the displays in “shipping mode.” However, after less than half an hour with Joan Support, the problem was straightened up and devices were ready to run. With that caveat out of the way, Mr. Danzig hasn’t encountered a problem since.

As for onboarding the rest of the team? The experience was simple, wonderfully smoothing out the meeting room experience. Mr. Danzig has certainly noticed fewer meeting room mishaps and hasn’t gotten a single call reporting issues with the Joan displays. In line with the old saying, “no news is good news,” the experience has been smooth, quiet, and incredibly successful. 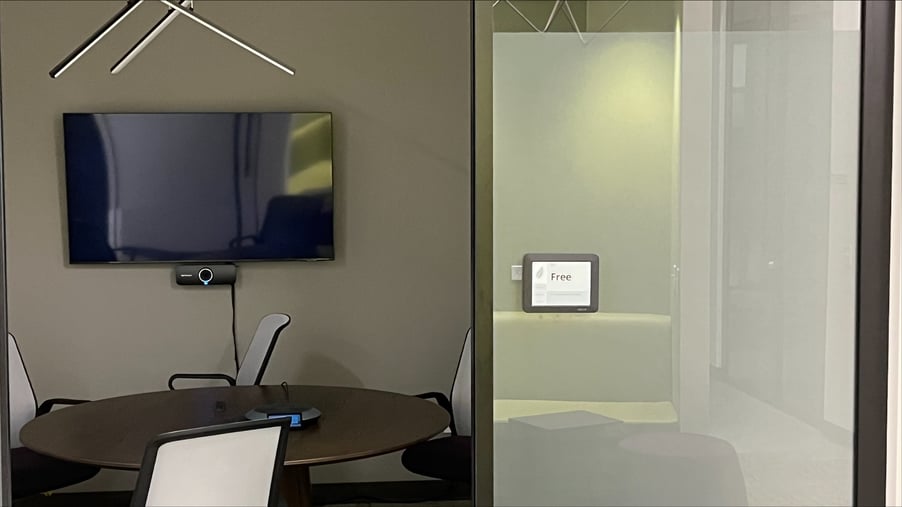 When asked to share his favorite part of the Joan booking system, Mr. Danzig marveled at the lack of maintenance the devices required. While Joan 6 displays can hold a charge for three months, Mr. Danzig makes an effort to charge them monthly. Once per month, at the end of his week, we simply remove the displays from their wall mounts and plug them in. Come Monday, he remounts them outside of the meeting rooms. Luckily, if he ever forgets to charge the displays, he has two more months before any of them run out of power.

So, the best part of having Joan on-site? A “peace of mind.”

During the interview, Mr. Danzig admitted he’d once been wary of how secure the Joan meeting room system was. After looking further into Joan security standards, Mr. Danzig now confidently backs the devices through and through. Not only do Joan devices store as little data as possible, but the software, in many ways, exceeds industry standards. Joan supports the highest enterprise security requirements with WPA2-EAP support, TLS 1.3 encrypted communication between the device and servers, and SSO, taking care of most security issues.

You may wonder, why did Mr. Danzig come to Joan to offer his uplifting review? Because

“if it can be used to help others, even skip looking at other solutions, I think they would get a great benefit.”

Kalera recently ordered six more Joan displays and is looking at adding them to their international offices sooner than later. With Joan language settings, the displays can be configured for offices around the world, particularly Kalera’s Kuwait, Singapore, Germany, and Taiwan locations.

What’s more, the company is growing: literally. The steady growth enables Kalera to start producing other products including basil, cilantro, and other types of vegetables. Without question, Joan will be integrated into every location, helping bring the spaces together into one fundamental platform. With consistency in mind, Kalera strives to make every office experience the same, helping employees feel at home when traveling from location to location.

Thanks to the quick and easy setup, Mr. Danzig is confident that the Joan onboarding experience in the other offices will be just as seamless as his initial experience.

Get in touch with our sales team to learn how Joan can enhance your office experience and skyrocket your ROI. 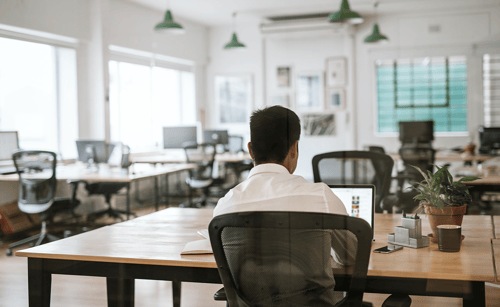 Wasted office space and what it costs