From an average, everyday end user’s standpoint, a thin client device is just another device. As long as it performs its functions and fulfills its purpose, it remains a mystery most people don’t really think of solving. Unsurprising and completely understandable.

And yet, when we’re talking about hi-tech solutions like Joan – purposely built to ensure a sustainable, user-friendly office experience, there are a few key thin client properties which allow it to do so and which should be exposed to the general public. After all, Joan wasn’t developed solely for IT departments. On the contrary, it was made for you and me, the users.

First, let’s quickly touch upon what a thin client is. Unlike fat clients (e.g. computers, androids), which run their features and store data directly on the device, a thin client relies on a remote server and an internet connection. It doesn’t have a hard-drive or operating system. In simpler terms: when you walk up to a Joan device, what you see on the screen is exactly what you get.

This characteristic of Joan’s is what makes it so very unique. It’s also intrinsically linked to the fact it requires a stable Wi-Fi connection. We’re all too familiar with how response time decreases when working online on a bad connection. In Joan’s case, the latter represents its bloodline, influencing other aspects of its performance.

Unparalleled battery autonomy is one such aspect. Joan’s e-paper screen provides us with exceptional longevity. Much longer than any digital solution running on fat client tech (e.g. LED or LCD). However, if the internet connection is unstable, with frequent disconnects occurring or too many clients installed, this can drain Joan’s battery faster.

So what happens if Joan runs out of energy or Wi-Fi? Does the screen go blank? No. As mentioned, thin clients are endpoints that rely on external servers, meaning nothing is stored on the device itself. In the event that Joan’s screen loses power, the device will not go dark, but will continue to display the information that was last received from the server.

In addition to being responsible for Joan’s miraculously long battery life, thin client technology also attributes to the booking system’s virtually impenetrable security. As discussed in a post from June this year, when disconnected, Joan becomes a “dumb terminal”, a phantom screen, if you will. No data whatsoever exists that can be infiltrated by a third party.

The mystery solved, we’re now able to appreciate fully the incredible benefits of using thin client technology and let Joan do what it does best: mange meetings in an efficient, green and steady way. 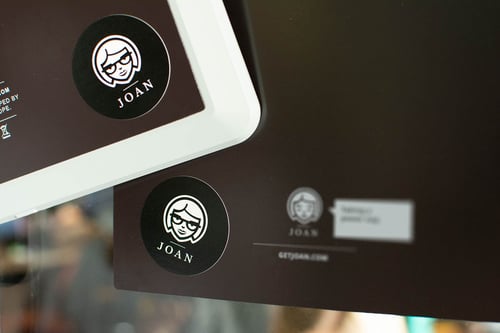