Most bizarre meetings in history

With Joan, meetings are scheduled easily, efficiently and economically. Rooms are booked, invitations sent, everyone knows where they need to be and who’s going to be there.

This was not always the case. Scheduled or random, let’s take a look at some of the most peculiar meetings that ever took place.

The King and the President 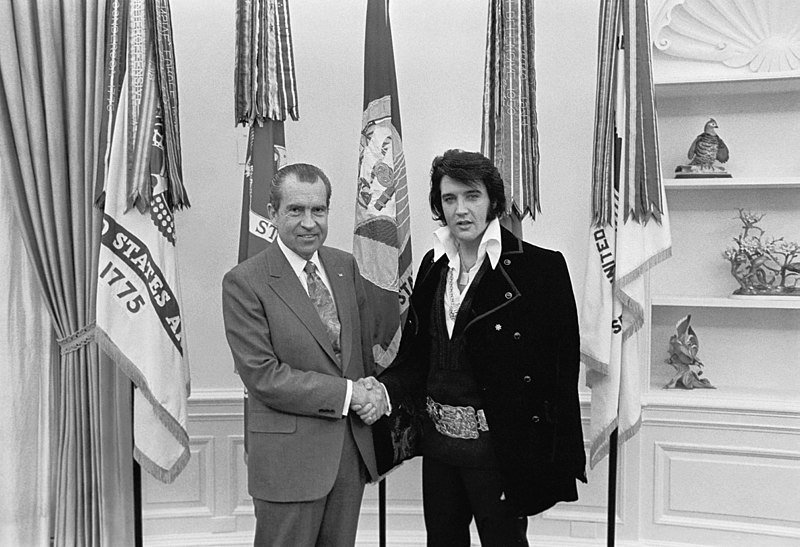 This fascinating meeting took place on 21 December 1970. It was between a US president and a monarch, or as he’s more commonly referred to: the King of Rock and Roll.

Elvis Presley flew to Washington D.C to visit the White House. Why? War on drugs. During his flight, Presley wrote Nixon a six-page letter requesting to meet with him and suggested that he be made a “Federal Agent-at-Large” in the U.S. Bureau of Narcotics and Dangerous Drugs.

Presley arrived at the White House gate, handed his letter to the guards, then waited. Nixon was advised to meet with the rock star, probably to boost his PR with the young, and a meeting was scheduled for that afternoon. During their meeting in the Oval Office, Presley said he wanted to help America in its fight against “the drug culture and the hippie element” by going undercover.

Nixon later awarded the King with a BNDD badge, making Elvis a “Special Assistant”. On a separate note, his wife Priscilla Presley wrote in her memoir that the late performer, known for his drug abuse which presumably led to his untimely death, wanted the narc badge because it “represented some kind of ultimate power. He believed he could legally enter any country both wearing guns and carrying any drugs he wished.”

A deliberate scam or a fantasy fuelled by the very narcotics he was claiming to rage war on, whatever Elvis’s motives were, it made one hell of a meeting.

Andy and Steve: two geeks at a party

When Sean Lennon turned nine in October 1984, his mother, Yoko Ono, threw him a very cool birthday party indeed. Among the invitees was Steve Jobs, who brought the boy a Mac computer as a gift. While showing the others how to use the device, one guest in particular showed the most interest – Andy Warhol.

Of course, the father of Pop Art wanted a first-hand lesson, which turned out to be quite ridiculous. Warhol kept lifting and waving the mouse around as if it were a magic wand. Jobs had to guide the artist’s hand with his own – using the floor as a mousepad – before Warhol, entranced by the synced brush on the screen, managed to draw something.

At the time, Jobs wasn’t the iconic cultural figure, and so Warhol, didn’t have a clue as to who he was. In his memoir, he wrote, “I said that once some man had been calling me a lot wanting to give me a Macintosh, but I’d never called him back or something, and then the kid looked up and said, ‘Yeah, that was me. I’m Steve Jobs.’” Now that paints a bizarre picture! 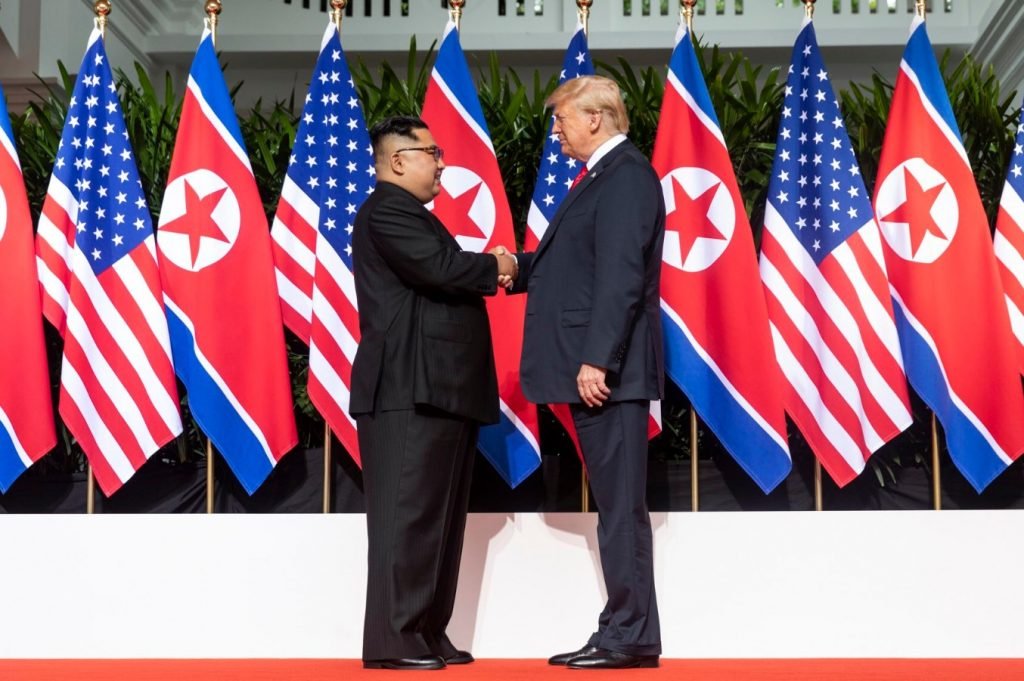 Flash-forward to the present, weird and unlikely meetings are still on the agenda. The most recent being that between two of the world’s most eccentric politicians, Donald J. Trump and Kim Jong Un.

After trading insults and threatening each other with nuclear annihilation, the US President and North Korea’s leader shook hands at a historic summit in Singapore.

This was the first meeting of its kind. The summit ended with a declaration that the two Koreas — who have technically been at war for almost 70 years— will sign a peace treaty later this year. Following a stream of aggressive and rather childish rhetoric from both sides, this sounds like good news. So fingers crossed that these two know what they’re doing… 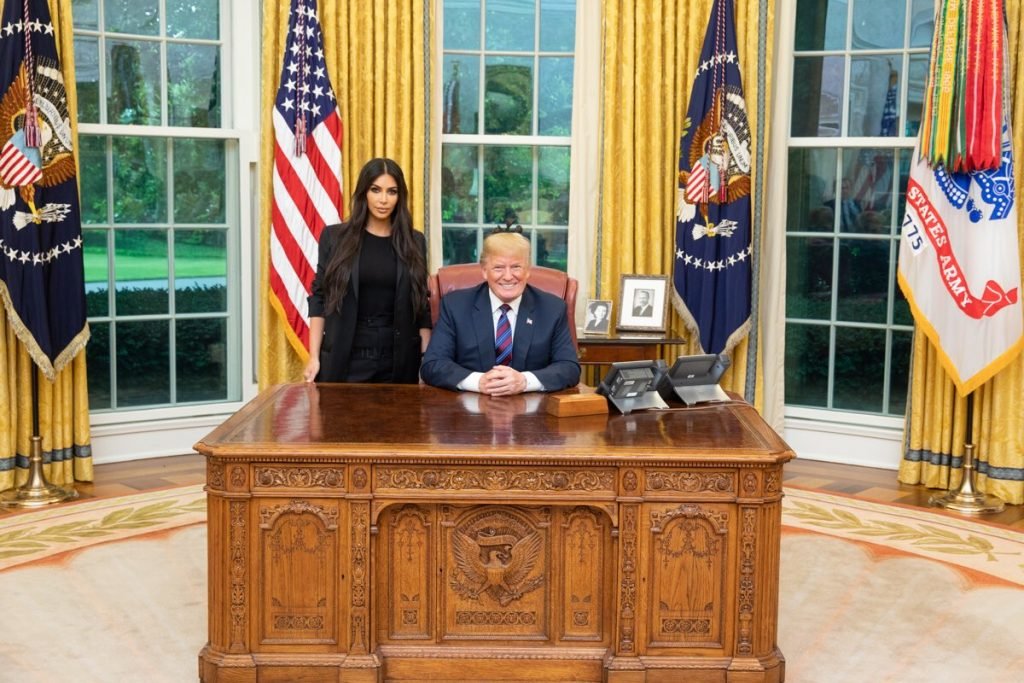 The White House seems to be a magnet for strange meetings. Almost four decades after Elvis left that building, Kim Kardashian West arrived at a side entrance to the West Wing with a somewhat similar motive related to law enforcement.

But unlike the rock star of old, Kim didn’t come to be deputized. Her mission was to meet with a former reality-TV star and businessman, who currently happens to be the leader of the free world, to persuade him to pardon a sixty-three-year-old great-grandmother from Tennessee.

Alice Marie Johnson, despite being a first-time, nonviolent offender, was sentenced, in 1996, to life in prison without parole on drug charges. Mrs Kardashian West, after seeing a video report from a news outlet about Johnson’s case, was determined to “do whatever it takes to get her out”. She was also prepared to discuss prison reform in general with Mr Trump and his son-in-law and senior advisor, Jared Kushner, who is overseeing the administration’s campaign to overhaul the nation’s prison system.

Although it’s hard not to be a tad skeptical about Mr Kushner’s level of qualifications in the field, and even harder not to question Mrs Kardashian West’s knowledge on the matter, one must admit that her cause, nonetheless, appears to be a noble one. Go Kim!

It would be interesting to see what kind of important invitation emails Joan might be sending out in the future. And from whom to whom. 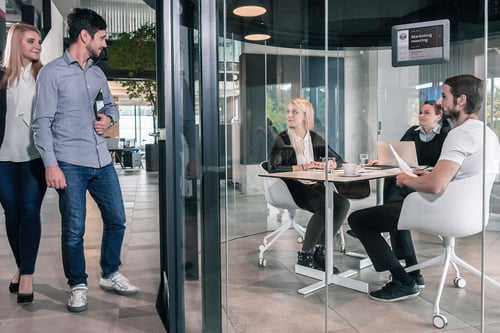 From Kim Kardashian West and Donald Trump to Steve Jobs and Andy Warhol, we take a look at some of the weirdest meetings in history.