People counting systems have been around for a while, especially in the retail industry. It’s because of their versatile use since they do not only count how many people are currently on your premises, but also calculate daily averages, predict rush hours, analyze customers’ path, and map out any hot spots.

So why are we still seeing a major boom in their popularity?

People counters are now essentials for all commercial buildings, ensuring that there aren’t too many people in an enclosed space at the same time. They are the easiest and the most efficient way to ensure your building doesn’t become a virus-spreading hot spot.

However, despite their intuitive value, they are often lacking two things: real-time occupancy communication, and simple deployment.

Who should consider people counters and communication of people occupancy?

As mentioned in the introduction, retail stores are definitely the first ones that started implementing people counting systems. But it wasn’t until recently that they started leveraging the system for showing real-time information on the number of customers. However, it shouldn’t end there. It’s easy to say that all commercial buildings should consider one, but let’s not leave it at that.

Workplaces and Office buildings – Communicating daily schedules to workers is one thing. Counting how many visitors and additional staff is in the office is completely another. With the return of workers to the workplace, meetings naturally became a part of the workday schedule – inviting a number of visitors. We already wrote a post on how to create covid-friendly meeting rooms, but the essential safety precaution is keeping track of how many people are in the building at all times.

Retail stores and Supermarkets – It’s easy to lose track if you’re manually counting visitors, and having someone stand for hours must result in at least a standard error rate. This is totally acceptable in some cases, but when we’re talking about containing a virus, it’s simply not good enough.

Universities and Educational Institutions – With the new post-corona guidelines, packed university halls with eager-to-learn students are a thing of the past. Thus, on-premise lectures will need to have a limited number of students for them to comply with regulations. What better way to count them than automatically showing the real-time number of people inside the building?

Museums and Leisure Facilities – Those two groups are facing similar challenges to retail stores and supermarkets. Except with museums, where the issue is multiplied since they follow the traditional room-layout. Each room can now host only a limited number of people. Counting them manually would certainly mean an increased number of employees, adding to the health hazard. 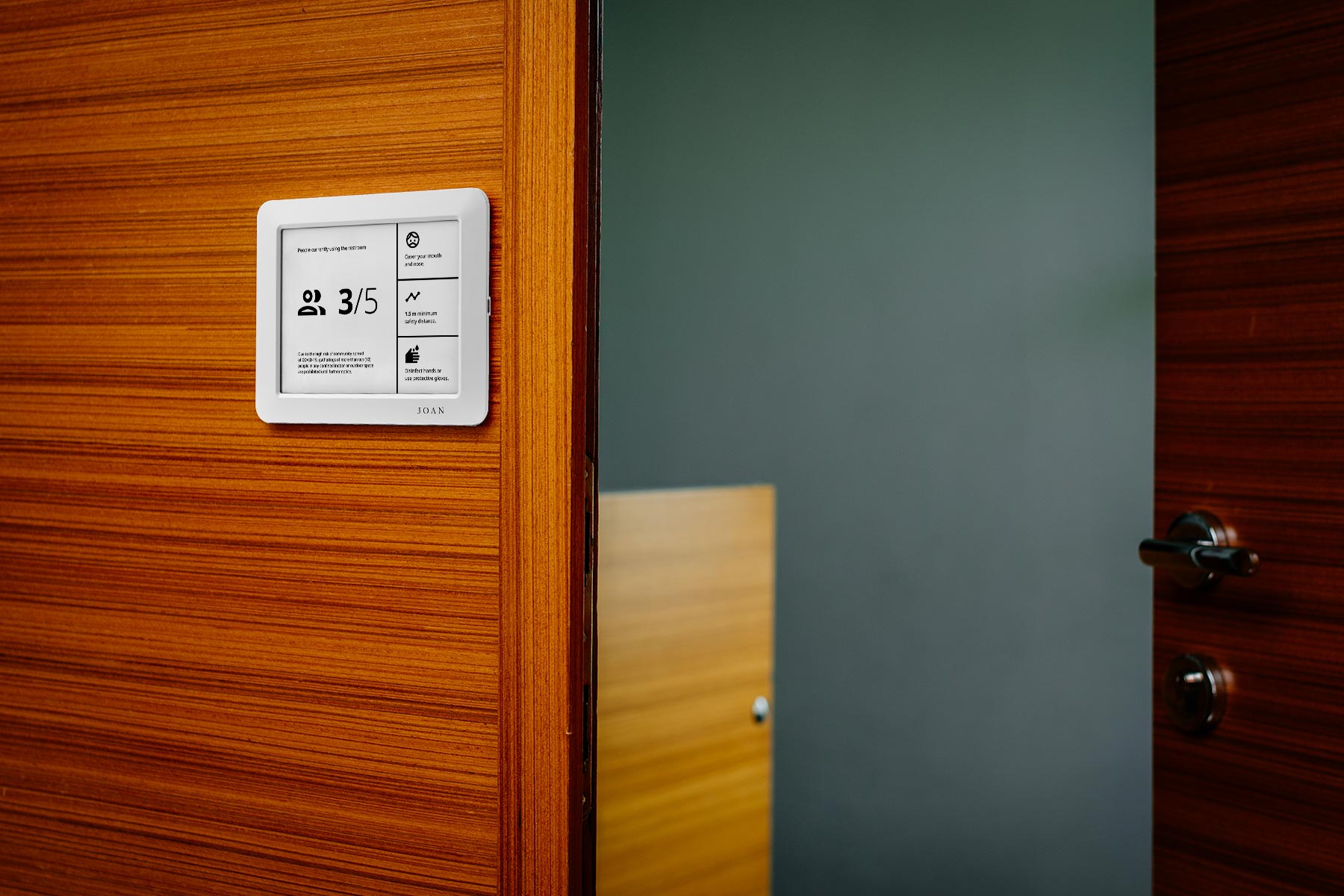 People counting’s nothing new, however, the mechanism behind it needs to get upgraded to be ready for today’s world. Before diving into those changes, let’s examine the status quo on the market.

As mentioned earlier, the standard people counter systems go way beyond people counting and tap into the real meaning of their behavior. Thus, there was no real urge to deploy real-time technology since everything that companies needed were aggregated results.

Occupancy communication is tailored for analysts

When it comes to communicating people occupancy, everything can be found on dashboards created for data analysts and business owners. However, with the latest crisis, there’s a new user that’s currently uncatered – an individual visitor of facilities mentioned above. Thus, there needs to be a second version of the display that won’t look like the go-to dashboard below. 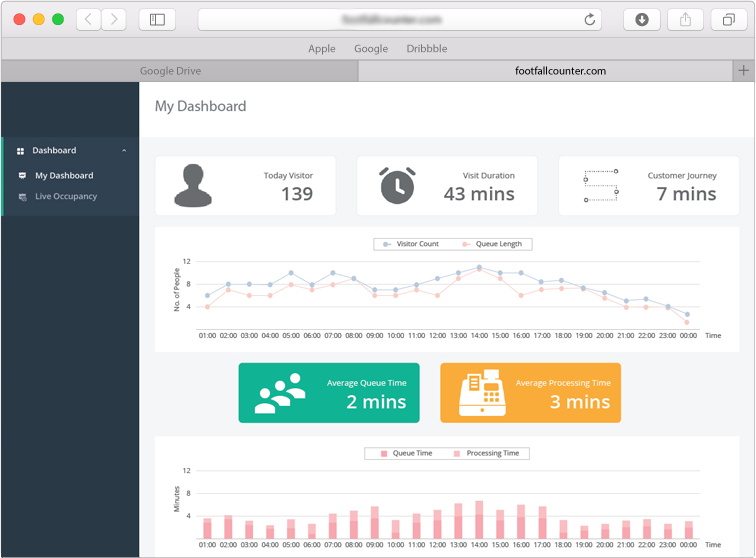 While we were describing how it used to be, we do need to acknowledge that the businesses behind people counting systems are trying to adapt to this new reality. And that’s where Joan comes in, challenging the status quo.

If you’re familiar with Joan, you’ve probably heard of one of our favorite lines: “Stay productive and do your best work”.

While this can be easily interpreted for the work environment, it extends well beyond the meeting room sphere. What we believe in is that everyone, not only individuals, should strive towards creating the best work, deploying their best systems, and planing their best processes. Consequently, it also means we’re big advocates of cooperation and integrations. No one can be the jack of all trades, and that’s alright.

Thus, we agree that creating dashboards is what people counting systems business excel at. They’ll show all the necessary information for business decision making. But diverting their core business to create an information board for individuals or even dipping their toes in signage hardware is out of the question.

That’s why we, at Joan, specialize in creating high-quality, battery-powered e-ink displays that are super easy to set up and manage. Not only that, we also developed a dashboard for the wider public that can integrate with already existing people counting systems.

With Joan, you get the people occupancy communication signage and information board in one. It gets updated in real-time, ensuring the information is always 100% accurate. Set up the maximum occupancy and additional information in a few very simple steps.

Joan Sign is the bridge between people counting systems and visitors, conveying clear information that’ll prevent the spreading of viruses.

Built on 12 years of experience and working with a variety of companies gave us a unique perspective on what all businesses crave for – simplicity. Adding an additional screen should be simple, connecting your systems to the new dashboard must be done in minutes. Especially in these times of uncertainty where “instantly” means the difference between a single affected individual and hundreds of them.

Joan Sign is the out-of-the-box system that embodies “instantly”. It arrives pre-charged – being 99% more energy-efficient than LCD screens means you’ll need to recharge it in a few weeks. There’s no need for wiring, drilling, mounting, or even placing the device next to a power source.

Our team of developers is already working on people counter systems integrations that you’d be able to activate with a few clicks. Completely frictionless, and ready to level-up the health standard of any public building from day one.

Start limiting the number of people in your building

There’s no room for errors and time delays. Get your Joan Sign and comply with the highest health regulations in the most efficient, simplest, and user-friendly way. Contact us at sales@getjoan.com and get yours today. 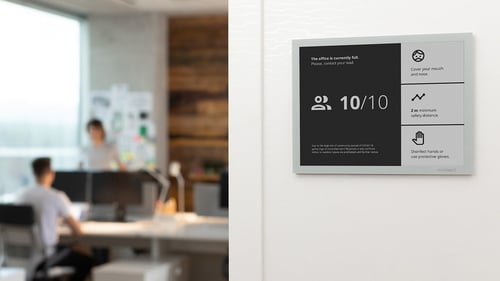 5 reasons why people counter displays will keep your workplace safe

Discover why and how to display real-time people occupancy in any commercial building.